Uber: learn's ""how do i find a dom(me) and get them to keep me - panel discussion & forum" was held on Sunday 29th March at Manacle, at The Clarence Hotel in Sydney.

Ms Dee wrote about the panel:

"a new format for workshop forums for us. a nominated panel, led by a relevant, topical facilitator. actively discussing the topic at hand. all ready to be quizzed and challenged by the audience in a forum configuration.

today's discussion - what can a submissive do to attract a dominant, and what do they have to do to ensure the relationship gets off the starting block, and stays in the race."

She kindly invited me to join to panel, along with several friends who grace the pages of Mistress160's Abode.

I love the atmosphere at Manacle. I'm glad the infamous chain spider web survived the move to the new location at Petersham! Here's an article about the launch last year from the Star Observer:

Manacle will officially relaunch with a week-long program of fetish events starting this Tuesday and culminating in a free party on Friday 29 August, to welcome new and old patrons alike into the refurbished premises of the Clarence Hotel. Three months after opening its doors, Manacle is set to tell the world it’s back — chain spider web and all — to satisfy the needs of the fetish crowd while branching out into new areas of entertainment.

Co-owner Stuart Fraser said in the months since the unofficial opening public response to the new premises has been overwhelming, with numbers exceeding all expectations. “We’ve seen people coming through in fetish that we’ve never seen before,” Fraser told Sydney Star Observer...

For Fraser and his partner Andrew Clarke the move away from Oxford St was about more than escaping escalating violence and straight influences along the strip, with the pair taking the opportunity to launch a range of new initiatives to cater to a wider range of patrons...

“I suppose coming from where we have, with 20 years of involvement with the fetish community, we were just at a point where we thought, ‘There has to be more to offer than just parties.’” It is an ethos which shines through the range of events planned over the next week for the opening celebration..."

Holding Uber workshops and some really great exhibitions (being just after Mardi Gras, there was also a terrific exhibition of posters on the walls) is also part of that ethos.

We arranged three chairs on the stage, and chatted with the owners while we waited for everyone to arrive: 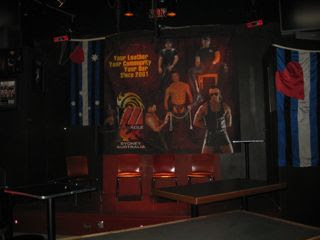 At first the audience was quite small but it grew considerably during the two hours. It was great to see some good friends there and to see new faces :).

The three panel members represented different types of contemporary Domme. We were all lifestyle dominants. However we searched for partners in different ways. This was what made the discussion that followed so useful for people looking for a partner.

The first speaker was a real time only dominant - she rarely does anything kinky on the internet and meets her play partners at community events or through friends. In fact she met her current partner (who was moderating the panel) via MsGawjusRedhead, our second speaker. MsGawjusRedhead uses the internet more, is a member of most major kinky sites and is happy to "hunt" for real time casual and long term partners via these sites. What was needed for a final speaker was a Domme who used the internet to find both online and real time play partners and so I fulfilled this role.

We each spoke a little about our background and then answered questions from the moderator and later, from the audience. We discussed in depth what do you look for in a play partner? (compatibility / honesty / trust / respect / loyalty / being friends or lovers first) (I had also raised this topic with dommes on Fetlife ... if you'd like to see their responses, check out here and here. Thank you, Ladies!) and where do you meet your partners online and real time? (play parties and other scene events / via other kinksters / online on sites like alt, collarme and Fetlife).

In terms of online, we discussed the importance of filling on profiles, of suitable profile photos / avatars, of how to contact a dominant. Towards the end MsGawjusRedhead quite rightly pointed out that we'd been concentrating on what people got wrong, so we switched to what people got right for a more positive finish!

Afterwards the panel joined attendees for a drink. I stole a friend's chips to nibble with mine, they were yummy. We got some terrific feedback. MsDee and I had said to each other before the event "if we get even one person coming up and saying this was their first real time event and that they felt comfortable being there, and even learned a few things, then we have a success on our hands". We ended up having several people say this LOL so we were really pleased.

Sincere Thanks
to Uber for helping me
attend the panel :)
logo:
Uber:learn