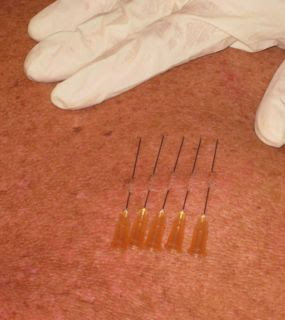 This post is part of the
Body Modification Series
and Edgeplay Series.
Please don't read it if you are not interested
in needle play or piercings.
On Saturday we drove north to Brisbane to stay with our friends Mistress Angelicca and paddy. We had a full weekend planned, including a needles workshop organized by Satet.

On the other hand you MUST take play piercings seriously. As Raven Shadowbourne observes:

"Play piercings are considered by many to be a form of edge play. They should not be done lightly and definitely not without some training in proper techniques. It is a very dangerous way to play. Certain safety procedures must be followed when engaging in such play. It is best to research such play, and witness such personally before attempting it on your own"

Which is why workshops like Satet's book up very quickly. This workshop was for basic and intermediate levels. I regard myself as VERY basic as I've only inserted needles once during play, and I think twice now have assisted with a needle play scene at play parties. This post is to give you an idea of what might happen if you attended a similar workshop.

Satet was very clear about what we had to bring to the workshop: pig's trotters! You can see sol working on ours below: 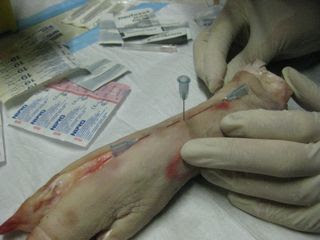 Yes, totally gross I'm sure, but it's a damn good way to practice before you start sticking needles in your sub lol.

Before we started the "practical" bit, Satet went through the technical side upstairs and she did an excellent job of it. Elianne's Needle play 101 and Sue J Abel's Play Piercing articles will give you the basics - but I repeat again, this is knowledge you have to go real time to access.

Then it was time to move downstairs and practice precision insertions on our trotters. Sol and I were lucky enough to have John as the instructor on our table (his partner Katty worked on another). John was a terrific teacher and gave us great tips as well as tricky tasks, such a lining up all the needles below towards his perpendicular centerpoint: 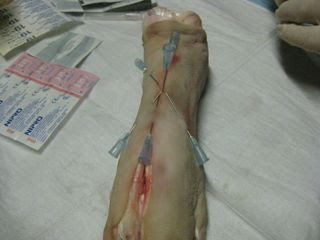 John very generously offered himself as a guinea pig for several students. This time Katty guided me. Here I am placing my first needle in John's back: 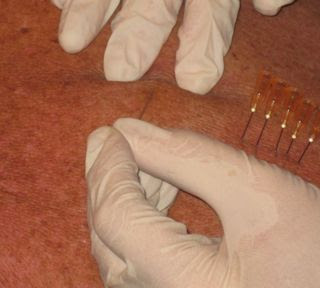 Now I'm finished, the last of the five is now in - I want you to appreciate how straight those little bastards are, readers LOL:

Then it was time to try placing needles in sol. This was a moment of truth for us. We hoped sol, with his high pain threshold, would find the sensation play to his liking. But we had no guarantee of how he'd react.

Again, John guided me: four needles aligned, one over the one on the far left (which increases the pressure on the bottom needle and ups the intensity of sensation) and the final needle on the right was woven in twice: 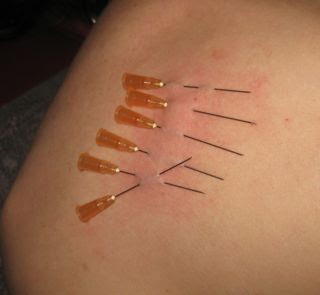 Sol found the experience interesting. His endorphins kicked in VERY fast. So he's definitely interested in further needle play! Who knows, you might also find it's something you want to try some day....

sol and Ms160 would like to thank
Satet, John and Katty
for sharing their time, expertise
and passion!
RESOURCES AND ONLINE REFERENCES: